Hanukkah (or Chanukah) is also known as the Feast of Dedication and the Festival of Lights. It’s origins come from the Jewish rebellion against outside oppression and idolatry over 100 years before Jesus was born. Its a fascinating story of heroism, faith, and God’s people refusing to compromise. While it’s not one of the commanded celebrations of the Bible (like the feasts of Leviticus 23) it has become a greatly cherished season for honoring God. It seems to have started out that way very quickly because it was being celebrated in Israel during the time of Jesus.

At that time the Feast of Dedication took place at Jerusalem. It was winter,and Jesus was walking in the temple, in the colonnade of Solomon.So the Jews gathered around him and said to him, “How long will you keep us in suspense? If you are the Christ, tell us plainly.”Jesus answered them, “I told you, and you do not believe. The works that I do in my Father’s name bear witness about me,but you do not believe because you are not among my sheep.My sheep hear my voice, and I know them, and they follow me.I give them eternal life, and they will never perish, and no one will snatch them out of my hand.My Father, who has given them to me, is greater than all, and no one is able to snatch them out of the Father’s hand.I and the Father are one.”

Here are four reasons why Hanukkah holds so much significance for the followers of Christ.

#1 Light of the World

The centerpiece of Hanukkah has to be the Hanukkiah. It is an eight candle lamp with one center candle called the Shamash. In the Temple, this candelabrum was to remain burning at all times. It was the source of light that allowed the priests to carry out the worship of Yahweh. Christians often celebrate this festival by decorating their houses with lights, inside and out, and lighting of the hanukkiah in honor of this element of Hanukkah. There is no greater light in the world than Jesus. The Festival of Lights honors the Light of the World as well as reminding us of our role to serve as lights in this world for all those walking in darkness.

When the Maccabean revolt regained the Temple, one of the first things they did was to light the lamp using the oil available there. The problem was, there was only enough oil for one day. However, the oil miraculously lasted a full eight days which is why Hanukkah lasts for eight days. This was nothing short of a miracle. And God is a God of miracles. Jesus demonstrated that during His earthly ministry. Remember those two times that He multiplied the fish and bread to feed thousands of people? Not only did He demonstrate miracles, But He is also a miracle. His birth to the Virgin Mary was a miracle. His death on the cross on behalf of humanity was a miracle. And His resurrection from the dead was a miracle. Jesus is, in fact, the miraculous provision of God for humanity. Far greater than the oil. And nothing is more miraculous than a sinful people being cleansed and made new by God. Hanukkah is eight full days of praising the Lord for cleansing us of our sins and giving us new life.

He is the propitiation for our sins, and not for ours only but also for the sins of the whole world.

#3 Dedication of the Temple

The temple had been desecrated by the leader Antiochus and idol worship had become a common activity there. The Jews chose to bring an end to this idol worship in the house of God and rose up in arms. After defeating their enemies, the Temple had to be rededicated to the Lord. Nearly 200 years later, Jesus would enter the Temple in Jerusalem to call out the idol worship being conducted there. He overturned tables and reminded the people of the purpose of the Temple. Jesus also changed the idea of what the Temple was. You see, God had chosen to live among His people in multiple ways throughout the story of the Bible. In the beginning, He walked in the garden with Adam and Eve. Later, He gave Moses the blueprints for a tabernacle. Solomon would construct the first Temple not long after King David passed away. Jesus said in John chapter two that He would “destroy this temple and in three days raise it up.” He wasn’t speaking of the building in Jerusalem. He was talking about His body. After the death and resurrection of Jesus, the temple became the believer and follower of Jesus. In the Temple, God’s Holy Spirit resided. Now His Holy Spirit lives in those who dedicate their lives to the Messiah Jesus. Hanukkah is a great time to rededicate our lives to the One who saved us.

Or do you not know that your body is a temple of the Holy Spirit within you, whom you have from God? You are not your own, for you were bought with a price. So glorify God in your body.

In the first Bible passage of this post, John 10, Jesus is shown celebrating the Feast of Dedication. That is obviously speaking of Hanukkah. As followers of Christ, we are supposed to do as our Savior did. Our life belongs to Him, to live a life honoring of Him, sold out for Him. If Jesus believed it to be important to celebrate Hanukkah than shouldn’t His followers? Besides, the Festival of Lights all points to Him anyways.

Peace in Christ brothers and sisters and happy Hanukkah! 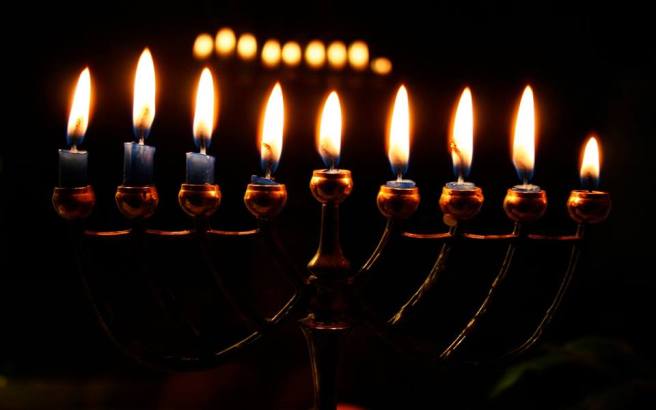 I love stories about heroes and sacrifice. They are incredibly compelling. That’s perhaps why Hanukkah is one of my favorite times of the year. Hanukkah is the season when we celebrate how, centuries ago, God’s people were willing to make enormous sacrifices, to fight against great odds, not comprise their faith, and do what was right. They became heroes through their obedience to God.

Here’s a summary of the amazing story …

Alexander the Great conquered most of the known world but died without an heir, so his massive new empire (which included Judea) was divided among his generals. This was fine for the Jews of Judea at first – until 175 BC, when the Seleucid King Antiochus IV Epiphanes invaded and tried to outlaw worship of the one true God, the God of Israel. Antiochus banned circumcision, outlawed the Hebrew Bible and even sacrificed pigs on an altar to Zeus in God’s Holy Temple. This prompted a Jewish uprising – the Maccabean Revolt – led by a Jewish priest named Mattathias and his sons. After ten long years of guerrilla warfare against a much larger and better equipped Seleucid army, the Jewish rebels did the seemingly impossible, pushing back their enemies, recapturing Jerusalem and cleansing and rededicating the Temple. That’s why those Jewish Maccabean warriors were heroes – they did impossible things, against impossible odds, because it was right and because God told them to. Their heroic actions are the basis for the celebration of Hanukkah. Especially important was the miracle of the oil. During the re-dedication of the temple, they found only enough specially prepared oil to relight the lampstand in the Holy place for one day. But miraculously, God kept the lampstand burning for eight days until new oil could be prepared! This is why we celebrate Hanukkah by lighting candles for eight days. All because the heroes of that day had faith that God could do the impossible.

Heroes today are those who work so hard to provide impoverished and often persecuted people with clean water, education, clothing, friendship, and most important of all, with the Good News of Yeshua (Jesus) who loves them, died for them and wants them to receive the gift of eternal life. After all, Yeshua is the reason for this season and this celebration. Here’s a few reasons why:

#1- He is our light, and the only good and pure thing that breaks back the darkness of our of a sinful world.

In him was life, and that life was the light of all mankind. The light shines in the darkness, and the darkness has not overcome it

#2- He is the ultimate hero who stepped down out of heaven to die on cross for a sinful humanity.

Have this attitude in yourselves, which also was in Messiah Yeshua, Who, though existing in the form of God, did not consider being equal to God a thing to be grasped. But He emptied Himself, taking on the form of a slave, becoming the likeness of men and being found in appearance as a man. He humbled Himself, becoming obedient to the point of death, even death on a cross.

#3- He is God’s provision for us that never runs out.

But when Christ had offered for all time a single sacrifice for sins, he sat down at the right hand of God, waiting from that time until his enemies should be made a footstool for his feet. For by a single offering he has perfected for all time those who are being sanctified.

Hanukkah is absolutely amazing. It’s full of spiritual significance, all of which points directly to the Savior of the world. As a Christian, this celebration has incredible importance. Who wouldn’t love celebrating Jesus for eight days straight? Lighting the Hanukkiah (tree of life), singing worship eight nights in row, recounting stories of God’s faithfulness, it’s so much fun and so encouraging! I invite all my brothers and sisters around the world to join me and my family in honoring our King, our Light, our Life. It starts tonight. Will you join me?