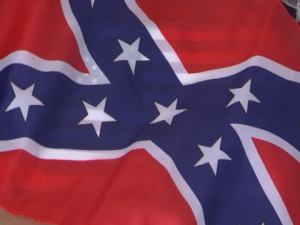 As many already know, a major controversy has been ongoing in Marion County Florida over the issue of a confederate flag. It seems some want it removed. Last week, interim County Administrator Bill Kauffman made the decision to remove it in response to the mass shooting that happened at a South Carolina church. However, a majority vote led to the hoisting of the bars and stars once again.

I have never been a fan of the confederate flag. To me, as with many others, it symbolizes a dark part of US History that should be buried in the past. But it seems to me that so many people want to keep this symbol alive. On one hand people view this flag as a beacon of hatred. That could be because the KKK and other white supremacy groups, mainly in the 20th century, flew it at their rallies and streamed it from their cars as they made the worst expressions of hate, both verbal and physical. So, should a group of racist morons be allowed to tarnish a piece of history that many others hold in high esteem? The answer is no…in the south at least. But perhaps that’s not a non biased party. Several people who were interviewed over the controversy stated that the flag is a cherished part of their heritage. It somehow reminds them of where they came from. It’s a symbol of pride and honor to them. I can’t help but to think to myself, “pride in what? Pride in slavery? I doubt that. Pride in a failed attempt at maintaining independence? Certainly not. Pride over being the hotbed of racism towards and murder of minorities for over a century after the civil war? Probably want to forget that one. What could it be that they are prideful of?” My inner monologue may have been a little sarcastic. So I started to think of other symbols that could be similar. The state flag of Texas, the loan star state, has been a symbol of their hard-fought independence for well over 100 years. Did Texas have slaves? You bet they did. The difference lies in the application of the flag thus the association for on-lookers is altered.

Truth is, the Confederate Flag was a battle flag for people who felt oppressed by, or more accurately feared the oppression of a powerful government. In fact, it wasn’t even the original flag of the Confederacy. It was adopted two years into the war originating in Virginia. So the question could arise, was the south’s struggle different from that of Texas. Not as different as you might think. How about another beloved symbol of rebellion…the American Flag. Did the American colonies have slaves? You bet they did. But the first flag was different from the one today wasn’t it? Only in the number of stars. Do we associate ‘old glory’ with slavery and racism, both of which happened under its banner? Maybe some but I strongly doubt Americans would make that cconnection. The point I’m trying to make is that the confederate flag is a symbol of independence. I believe it to be interwoven into the fabric of life in the Southern culture. It’s a picture for many that represents the common attitude of most Americans that’s says, “don’t tread on me government!”

This might be hard to imagine but had the United States lost to Britian, or Texas lost to Mexico, those flags would be extremely controversial. Side note, the U.S. started as a confederacy just like the seven states that broke away in the 1860’s. But I find it hard to believe that Britain or Mexico would be fine with their colonies flying symbols of rebellion. But the United States of America is neither of them. This is the land of freedom, a land where people may express themselves as long as it isn’t illegal or insight something illegal. Like it or not Marion County has every right to fly that flag whether I’m offended or you are offended by its symbolism. Mr. Kauffman’s response to the shooting by taking the flag down shows that the South is still sensitive to the issue of brutal racial violence, which has been fueled by the deaths of black men by white cops (which is a whole other topic I’m not getting into…now anyways). But the public outcry to put the flag up shows that the flag is about far more than that, and possibly for many, has nothing to do with it.

I close with this. Jesus Christ calls us to not lay a stumbling block before our brothers and sisters and to live at peace with all in so much as it depends on us. Would I wave a symbol that could offend because it is linked to a ruthless past? Not a chance. The mission of the believer is to be gracious towards others, and loving, as Christ loved us and gave himself up for us. But do I have a right to tell people to not fly a flag that means more to them than what racist bigots made it into? Nope. But believe me, if the south started flying that flag to promote injustice I’d be the among the first in line to dread that flag under foot. For now, I’m going to devote more time to praying for healing and forgiveness, both of which can be found in full measure in Christ. God bless!