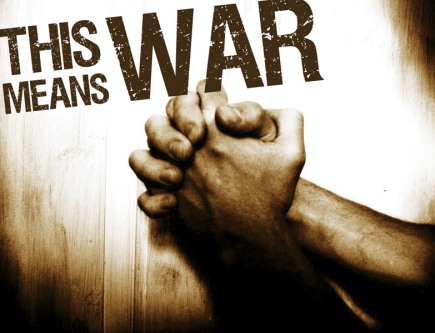 I heard once that the marriage relationship is meant to tell the truth about who God is and how He loves. That concept comes from passages like Ephesians 5:25 that states that our love should reflect the way that Jesus loves. There are also several verses that compare the church’s relationship with Jesus as a marriage union where Jesus is referred to as the Bridegroom and the church is the bride (I know that’s weird if you’re a guy). A couple of those verses to check out are Isaiah 61:10 and Matthew 9:15. Also, one day in the future we’ll be invited to a marriage feast with Jesus as the host. In the bible it’s referred to as the marriage supper of the Lamb where the church will be joined with it’s Bridegroom(Jesus). That story is in Revelation 19. Check it out:

Then I heard what seemed to be the voice of a great multitude, like the roar of many waters and like the sound of mighty peals of thunder, crying out,

“Hallelujah!
For the Lord our God
the Almighty reigns.
Let us rejoice and exult
and give him the glory,
for the marriage of the Lamb has come,
and his Bride has made herself ready;
it was granted her to clothe herself
with fine linen, bright and pure”—

for the fine linen is the righteous deeds of the saints.

In the last post we talked about how strong a marriage union can be when it includes the third cord who is God. So not only is a marriage meant to reveal qualities of God, it also includes God. Any relationship that He is a part of will be a high priority for the enemy of God. You’re a target! Your spouse is a target! Your family is part of a spiritual hit list that the enemy of God will do anything to bring down and tear apart. That’s the bleak reality, but it doesn’t end there. We’re under assault but from a defeated enemy. Which means, if a marriage has God, then a marriage has the victory already. But it’s not a passive victory. It has to be claimed.

A lot of marriages don’t experience the kind of victory I’m talking about because they don’t join in the fight. They might not even realize there is a fight. They might think they have a fight but that their the opponent is their spouse. It’s not…ever…no matter what the issue is or what they’ve done or said. Your spouse is NOT the problem. And neither are you. Remember what we’ve already talked about. You and your spouse are meant to be one, laced together in a powerful three cord bond with the purpose of serving and loving one another in a sacrificial way. That is marriage and it is beautiful. I know people fail and come up short. I know that sometimes people make a complete wreck of things. But nothing that our spouse does will ever make them the enemy of our marriage. There is another. One who is behind it all. One who wants nothing more than to split you up.

He goes by several names: Satan, the Devil, Prince of the power of the air, ruler of this world, and many more. He is not the fictitious little red man with horns and a pitchfork. He was once the most beautiful angel among the hosts of heavens. Then he lead a revolt against God and he’s been trying to destroy God and those close to Him ever since. He’s been described as both a vicious dragon and an angel of light. Whatever form he takes, and whatever name he goes by, he hates you and he hates your spouse. He hates your marriage. And he has an entire army at his command to engage you in spiritual combat.

His strategies are subtle. It’s the lures of attraction he uses. It could be a career that he wants us to place as priority over our spouse or family. It could be a relationship with someone of the opposite sex that starts innocent enough and spirals into a full affair. It could be pride that causes us to refuse to say I’m sorry or meet our spouse half way. It may be control that propels us into demanding our own way. It could be selfishness so that we seek what we can get out of our spouse rather than what we can do for them. It could be busyness which takes us away from our spouse and then the silence creeps in and intimacy fades. It could even be the delusion that we need to change our spouse and that’s why God gave them to us. His strategies are the harsh words spoken in the heat of an argument. He loves both the silent treatments and verbal abuse. He loves for either spouses to not be physically intimate and he loves physical abuse. Satan isn’t just a bully. He is the full embodiment of evil and there is no tactic below him. Napoleon wasn’t the originator of the strategy of divide and conquer. Where do you think he got it from. Satan wants to drive the wedge between us and our spouse, in any way that can be achieved.

So much of our energies are wasted. We have all the weapons at our disposal, and we all need to fight this battle, but rarely do we. We need to be praying over our spouses, every day. We need to be very choosy about what we allow into our relationship, meaning the movies, music, and other extracurricular activities. We need to serve our spouses more. We need to lay our lives down in sacrificial love towards them. They need to experience grace from us. They need to know that we love them no matter what. We need to engage them in deep and meaningful conversations. We have to be an open book. The marriage home can afford no closed doors, no ridicule, no shaming, no exclusion. You and your spouse are one, glued together by God himself. You have to keep the glue in the relationship.

I love the movie titled the “Ghost and the Darkness.” It came out back in 1996 with costars Val Kilmer and Michael Douglas. The movie is all about these two lions in Africa who are terrorizing this railroad building project. They strike at night, killing workers in their tents or who have wondered off from the camp. It’s a pretty intense movie and few scenes are more intense then a dream sequence that Val Kilmer has while nearing the end of the bridge construction.  In the dream, Val is getting the opportunity to see his wife, and newly born child, who he’s been away from for months. Picture the scene. Val is in the middle of a large crowd as they work laying the rail lines. In the distance, Val sees his wife and child on the rail platform having just arrived. Val is ecstatic. He begins making is way towards his family when all of a sudden something catches his eye. As Val scans the tall grass that surrounds the platform, he spots a tail waving just above the golden tips of the grass. He begins to hasten even quicker but it is extremely difficult to make his way through the crowds. He shouts for his wife to go back into the train depot but the noise from the workers drown him out. The next moment is heart stopping. In a matter of seconds, the massive lion darts from his cover and lunges for Val’s wife and child. At that moment he is startled awake. Intense right? Well, satan is that lion, waiting in the tall grace, ready to devour your family. He’s waiting for his opening.

Stay alert! Watch out for your great enemy, the devil. He prowls around like a roaring lion, looking for someone to devour.

We can’t afford to ignore that he’s there. The cost is far more than any of us can bear. Don’t let this cause you to freeze in fear of what he may do to your marriage. Use this as a means to understand what stands against you. The best way to defeat your enemy is to know his strategy. Field Marshal Erwin Rommel of Nazi Germany wrote a book on strategies in warfare in 1937. Unfortunately for him, American commander General George Patton, read the book and used his strategies against him during the course of World War II. The same applies for our marriage. We know his tactics. And more than that, we are armed with the greatest firepower in the world in order to defeat him. Imagine if Val Kilmer had a machine gun and couldn’t mowed that lion down to protect his family, but then chose not to use it. That’s the equivalent of us choosing not to partner with God by including him in all our decision and using the power of prayer for our spouses and children. And lets not forget ourselves in this equation. We definitely need to be covering ourselves in prayer and spending our days devoted to loving and serving God. Nothing disarms our enemy more than a heart poured out for the Lord.

For though we walk in the flesh, we are not waging war according to the flesh. For the weapons of our warfare are not of the flesh but have divine power to destroy strongholds.

Finally, be strong in the Lord and in the strength of his might. Put on the whole armor of God, that you may be able to stand against the schemes of the devil. For we do not wrestle against flesh and blood, but against the rulers, against the authorities, against the cosmic powers over this present darkness, against the spiritual forces of evil in the heavenly places. Therefore take up the whole armor of God, that you may be able to withstand in the evil day, and having done all, to stand firm. Stand therefore, having fastened on the belt of truth, and having put on the breastplate of righteousness, and, as shoes for your feet, having put on the readiness given by the gospel of peace. In all circumstances take up the shield of faith, with which you can extinguish all the flaming darts of the evil one; and take the helmet of salvation, and the sword of the Spirit, which is the word of God, praying at all times in the Spirit, with all prayer and supplication. To that end, keep alert with all perseverance, making supplication for all the saints

Follow Up: Use these questions as reflection or a discussion between you and your spouse. God bless my brother’s and sisters!

1- Have you ever viewed your spouse as the enemy? If so, take the opportunity to ask them for forgiveness.

2- How are you actively fighting for your marriage?

3- In what ways does your marriage reflect Christ’s love for His church?

4- What is one new thing, or renewed thing, that you can do regularly to fight for your spouse (and kids if you have them)?

5- What ways has the enemy of your marriage subtly tried to drive wedges in your relationship? I suggest committing to praying over these areas with urgency and consistency.