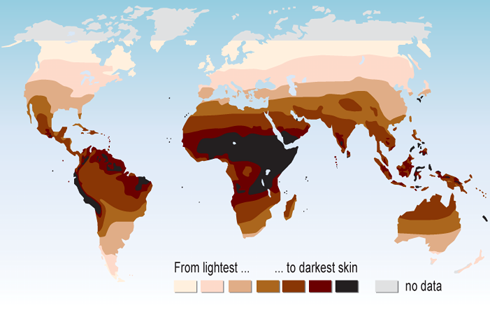 The battle over racism has reverberated throughout history. Cultures have used the concept of race, or variations of it, to subjugate groups of people for millennia. In the US alone, we denied civil rights to particular groups based on the “color” of their skin. More than that, we used race to segregate large portions of our population from public areas and certain jobs. If that wasn’t enough, we even bound people in chains all because of race. However, all of these conflicts have occurred based on a faulty concept. There is no such thing as multiple races. That’s right! Races don’t exist, therefore racism is discrimination towards something that isn’t real. That, among many other things, should make racists feel great shame. How have we come to such a place where people are so hung up on belonging to a specific race? How did we ever develop a construct of racial groups in the first place?

Over 100 years ago, an American sociologist named W.E.B. Du Bois spoke out on this issue. He was concerned that race was being used as biological explanations for social and cultural differences between different populations of people. Du Bois criticized the idea of using white and black labels for discrete groups. He claimed that these distinctions ignored the scope of human diversity and were not biologically correct in the first place.

Recent scientific research has supported Du Bois’ claims. Here’s a quote from Michael Yudell, a professor of public health at Drexel University in Philadelphia who has been involved in studies on the matter.

Race has been a tool, not for understanding people or for preserving culture and identity, but to subjugate and segregate people groups within societies and without. The best way for racism to disappear in a society is for people to come to the reality that race is only a construct of their own imagination. Human cultures have been bred to see race. We’re constantly inundated with it. We hear about it in schools, in music, on movies, and in the news. But race, has no place, among the world of facts. I’ve written this topic in a post two years ago but the issue has only grown in our American media and mainstream since. So I feel compelled to share once again. Below are just a few reasons why race is a false title for you and me to apply to anyone:

#1- We all have the same beginning.

Race: a group of persons related by common descent or heredity.

Every single human being on planet earth has the same descendant.  It doesn’t matter where you live, what language you speak, or how you look. We are all related. Africans are related to Europeans, are related to Americans, are related to Asians. We are all one big family. If we are all related, race cannot exist. To discriminate against another is to attack your own family. But if we all started from the same two people, then why the variations? Why do we look so different? For the same reason why you don’t look like your distant cousins. Now multiply that by billions of people genetically mixing over thousands of years and it’s not too difficult to understand why humanity is so diverse.

One thing people use as a race identifier is the color of skin. But what few people realize is that every single human is the same color. That’s right! So why the different variations?  It all comes down to how much melanin your body produces (which also affects eye and skin color). People have the ability to make multiple kinds and levels of melanin in their skin and that will determine the shade variation of your appearance. That is all determined by the combination of genes that have mixed and been passed down over the ages. The amount of melanin can be varied from very little, like in fair skinned people, to a lot found in dark brown skin. In combination with this is also the color of our skin cells. Most cells are clear and we can see the reddish purple of the blood through very pale skin, but in our outer skin the upper cells have keratin fibers for protection. Keratin has a pale yellowish hue. Variations in human skin shade also correlate closely with geography and the sun’s ultraviolet (UV) radiation. So humans have various shades based on the combinations from melanin production, keratin, the blood under their skin, and exposure to the sun.

#3- The concept of race is fairly new

Contemporary scholars argue that race was made common place as recent as the 18th century as people were searching for a way to classify people. Many disciplines have declared that the real meaning of race, especially in American society, has to do with social realities, as opposed to physical variations in the humans. In other words, race was created as a means of justifying abuses. And even today, race is being used to further drive a wedge among people within a nation. Prior to the 18th century, most civilizations viewed others in accordance with people groups and family lineage. Read historical texts, including the bible, and see how labels are used. So while persecution still existed in great abundance before the 1700’s, it was based on biases, a desire for dominance and power, socioeconomic status, and differences in cultural customs. You know who enslaved Africans first? Africans. You know who the “white” Europeans enslaved first? Other “white” Europeans.  All of the elements of discrimination that once existed still exist today, yet we’ve added the race element to it as well, and it has been tearing at the American nation ever since.

#4- The One that created us gave us a real image

Race is more about image than it is anything else. We are physical creatures and we often view others based on their physical appearance and how they portray themselves and that goes a long way in determining one’s image. We aren’t black. We aren’t white. We aren’t anything that has to do with color. We aren’t meant to put ourselves in a tiny box labeled Caucasian or Hispanic or African American. Those labels should have no place in a society. They only serve to divide and brainwash us to view ourselves and others based on those labels. We all have the same inherent label and image. Once people can come to grips with that reality, the better we’ll be in treating and viewing others how they should be.

Enough with Unite the Right. Enough with KKK and White Supremacy. Enough with Black Lives Matter and Black Power. Can’t we all see that this is all self defeating? Can’t we see that all this race talk is further making race a problem? We need to wake up America! There is no such thing as Black and White. There are only people. We are all the same race. We are all image bearers of the One that created us. You know how conflicts arise? Pride and jealousy over differences in people. Sin! It’s people developing images for themselves and others that are so distant from who we were created to be. We are all different. And that is good. Maybe a better way to phrase it is, we’re all unique and that’s how we’ve been designed.

Jesus Christ, God in the flesh, came to planet earth to destroy this social phenomenon of false imagery and discrimination. He came to unite His creation based on who He is, not based on our differences. We are created with differences, not to mistreat and label others, but so we will learn to be in community and use our skills to benefit humankind. Faith in Christ, unites. Faith in Christ destroys walls. Faith in Christ opens our eyes to see beyond physical appearance. Faith in Christ helps us to know who we really are and were always meant to be. Lets have a few less protests and a lot more proclaiming the love of Jesus. Lets forget about resisting the national anthem and focus on a revival of hearts on fire for Jesus Christ and His mission.

There is neither Jew nor Gentile, neither slave nor free, nor is there male and female, for you are all one in Christ Jesus.