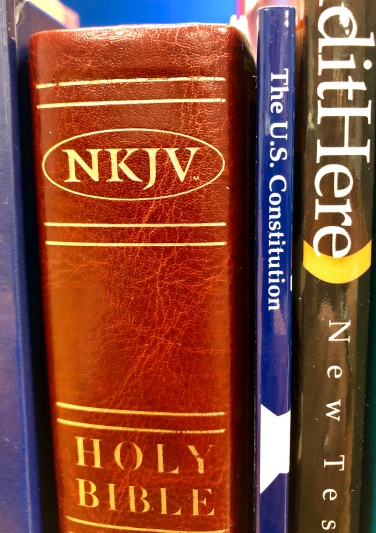 There has always been a debate about what God has told mankind. In fact, it started in the Garden of Eden. The serpent tried to confuse Adam and Eve about what God had told them. The words “did God really say” are still being uttered by believers and non-believers alike. Keep in mind that those words are what led the first people into sin. Deception and a muddled interpretation of God’s instructions to His creation are a formula for destruction. We need to consider the source of those things. The serpent is an image of Satan, the one opposed to God and everyone who claims allegiance to Him.

I teach US History and American Government at a local high school. I love the US Constitution. It’s one of the most incredible documents in World History. It was crafted in less than three months, in secret, by only 55 people. This small group engineered one of the longest lasting governments this world has ever seen. Have the people in that government always been good? Definitely not. But the system is more than sound. A few years after the document was ratified, amendments were added which became known as the Bill of Rights. Contained within those first 10 amendments are rights that we battle over and fight for to this day. Seventeen more have been added in the 227 years since. This amazing document, as flexible, enduring, and cherished as it may be, is still imperfect. That’s because it was created by imperfect people. They were great minds. No one would argue the contrary. But none of them were perfect.

An amendment is a change made to a legal document. Perfect things never require change. You can’t add to perfection, you can only detract from it. Our government has added 27 changes to the US Constitution because it needed to be changed. Our nation and any other for that matter are made up of imperfect people. We have a history of discrimination, war, and oppression. Each nation has a different story but they’re all fluid. No society is constant because no society bases it’s existence and guidance off of a constant source. The US Constitution of 1787 was not worthy of being left untouched and unaltered. Even with its 27 additions, this document is lightyears away from being the foundation of truth to anyone’s existence.

I see a frightening trend among certain sects of believers who prefer to treat the Bible as though it was the constitution. As though it was imperfect and in need of altering. I hear people claiming to be followers of Christ, second-guessing the very things Christ spoke and stands for. To question the Bible is to question Christ. To question the Bible is to question the Creator of all existence. We cannot approach the Bible as though it needs to be flexible and mold to the times. I have no problem in making God’s word relevant to our time. It does that all by itself. The Bible is a mirror into everyone’s soul. It doesn’t matter if you lived a thousand years ago, a hundred years ago, or are alive today, the Bible speaks to your existence. It doesn’t need to be amended. To believe that it does means that you believe that God is imperfect. We do the society we live in no favors when we utter the same words as the serpent of the garden, “did God really say?” Those words only create an atmosphere ripe for sin to flourish.

We don’t mold the Bible to our worldview. The Bible is our constant, perfect document. We mold our worldview into what the Bible says. Just because the views on certain issues change in society does not mean that the Bible needs to change with them. What the world needs are followers of Jesus who are not ashamed of the truth. People who are willing to stand against deception and the love of sin that is so persistent in this world. The world does not need compromising souls but passionate disciples.

Jesus answered, “It is written: ‘Man shall not live on bread alone, but on every word that comes from the mouth of God.'”