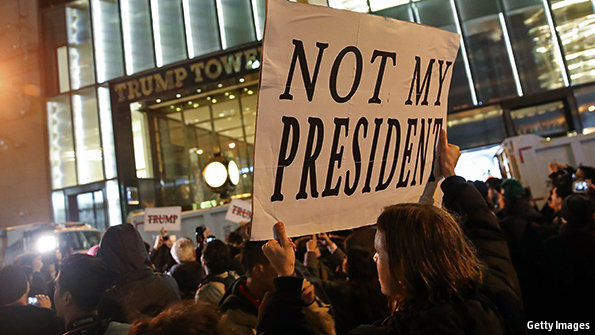 I’ll keep this short and to the point. No matter the words that Trump spoke during his campaign that made him out to be a divisive and crude candidate, those words are now being overshadowed but an angry hate-filled mob. Perhaps one of the best things that could’ve happened to help his image was to have many of those who don’t support him and the election put on a vulgar display as many of them have done since Election Day. Don’t get me wrong, the only thing that will completely erase his shady past will be if his actions now as a President, husband, and father reflect a humble and repentant heart with a desire to serve the best interests of this nation.

His opponents say that he will tear this nation apart. So what do many of them do? They lead march after march and paint their foreheads with labels like, “not my president” and smash windows and vandalize buildings. All of these protests serve one purpose: they breed division. They’ve even gone so far as to call upon our electoral college to ignore the popular votes on their states. Are you kidding me? I am not a fan of Trump’s character which is the biggest reason I didn’t vote for him,  but every bit of hate speech spoken by his opponents makes them look a whole lot worse. Some people continue to say how much they fear they have with a Trump presidency yet it’s been Trump supporters who have been beaten on the streets.

This post is by no means meant to prop up Donald Trump or make him out to be a stand-up guy. Only time will reveal his current character and ability to be our President. But I would just plead with my fellow countrymen who are causing controversies and division, striking fear, and spreading vile speech on social media and in the streets to stop and take a good long look at what they are doing and saying. They say they want a nation of inclusion and peace yet they are doing things to create the exact opposite atmosphere. I am a huge fan and advocate for the democratic process and free speech but the Anti-Trump movement has been the epitome of hypocrisy. Want inclusion? Be inclusive. Want peace and unity in our nation? Be unified. Fear an administration that is discriminatory? Don’t discriminate. After all, its not our president who sets the cultural and ethical patterns of society; It’s society itself.

Let’s be the example of love, unity, peace, kindness, and goodness that we want to see in our leadership.