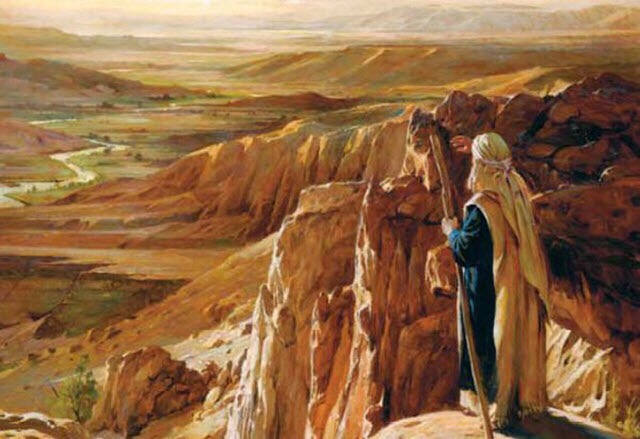 I’ve had to punished my girls and I can tell you that it is one of my least favorite things to do in life. It may be necessary and right to do, but it is so hard sometimes. And even when I punish them, I have no intentions of ever leaving them. When correction is needed in their lives, and they have to face the realities of consequences, I want them to know that my love for them will never diminish. I imagine God looks at us in the same way only with greater intensity.

In the middle of pain, especially the self induced kind, it’s easy to assume God is nowhere to be found. After all, it’s my own fault i’m in this mess so why would He be here? I sinned and disobeyed Him so why would He want to be with me? I’ve committed this same old offense once more so now He really must have given up on me. How could I blame Him if He was absent in my consequences?

The life of Moses is a captivating one to say the least. He narrowly escaped being murdered by Egyptians when he was a baby, he was raised by both his mother and pharaoh’s household, he killed an Egyptian while standing up for a fellow Hebrew, he fled into exile for 40 years, then he’s called by God (out of a burning bush!) to tell the most powerful nation in the world to release its slave labor force, he’s put in charge of a nation of people while on an exodus over hundreds of miles, and constantly has to mediate between a Holy God and an ungrateful people. No doubt that he must have been an amazing man. But even as incredible as Moses was, he still suffered from the same ailment as all of humanity: sin. One such sin caused a major consequence. In the book of Numbers, chapter 20, Moses and Aaron have to deal with a bit of a water shortage. To sum it up, Moses and Aaron don’t follow God’s instructions and end up taking the glory for bringing water from a rock rather than giving God the glory for it. The effect from that would be denied entry into the promised land. Ouch! But that’s not the point of this story. Moses screwed up and so do we. No need to remind everyone of that. What I want to point out came at the end of all this, when Moses is facing up to the consequences, at what would be the end of his life.

“Then Moses went up from the plains of Moab to Mount Nebo, to the top of Pisgah, which is opposite Jericho. And the Lord showed him all the land…And the Lord said to him, “This is the land of which I swore to Abraham, to Isaac, and to Jacob, ‘I will give it to your offspring.’ I have let you see it with your eyes, but you shall not go over there.” So Moses the servant of the Lord died there in the land of Moab, according to the word of the Lord, and he buried him in the valley in the land of Moab opposite Beth-peor; but no one knows the place of his burial to this day.”

Moses had to miss out on walking in the promise land but he got something so much better. The Lord went up the mountain with him. The Lord showed him a glimpse out of grace. The Lord buried him where only He knows. Despite Moses’ disobedience the Lord never left him. Once chosen by God, Moses was His forever. That didn’t exclude Moses from the consequences of his sin but it did keep him in grace. And that is no consolation prize.

I heard a story once of a little boy who was placed in timeout by his mom. He begged and begged to be let out but his mom stayed firm. Along came grandpa and the little boy pleaded with him to take him out even though his mom had said no. Instead of taking the boy out, the grandpa sat with the boy in time out until his time had been served. God is much like the grandpa. He may not excuse us from the hurt and pain that our actions create, but He’ll be right there with us. Keep in mind that God is no stranger to punishment. He chose the most excruciating crucifixion for our sake and He didn’t deserve it. If He’ll hang on a cross out of love for us and you can be sure He’ll be with us in our time outs, our pain, our breakups, our divorces, our failing health, and all our sufferings.

Believer, our sin will reap consequences in this life, for us and others. There may be no condemnation for those who are in Christ Jesus (Romans 8:1), but that does not exclude us from pain. On the other hand it also does not forfeit us from God’s grace. Where we have to be concerned is if there is no desire to repent of sin. Moses repented and continued to pursue God all the way to the end. If God has chosen you then He’ll be right there with you even as you battle your way through the wake of your sin.

Our mistakes are not the end of our story just like it wasn’t for Moses. After all, Moses did enter the promise land one day. And who took him there? It was the Lord.

“And after six days Jesus took with him Peter and James, and John his brother, and led them up a high mountain by themselves. And he was transfigured before them, and his face shone like the sun, and his clothes became white as light. And behold, there appeared to them Moses and Elijah, talking with him.”

The desperate heart has only one place to look, and that’s up. Think God has left you? Not a chance. Screwed up royally? God is still at the door knocking. Whether you’re a Believer or not, God is in pursuit of you. Our ugliness doesn’t drive Him away. If it did, He never would’ve gone to the cross for us in the first place.

One thought on “Punished NOT Abandoned ”